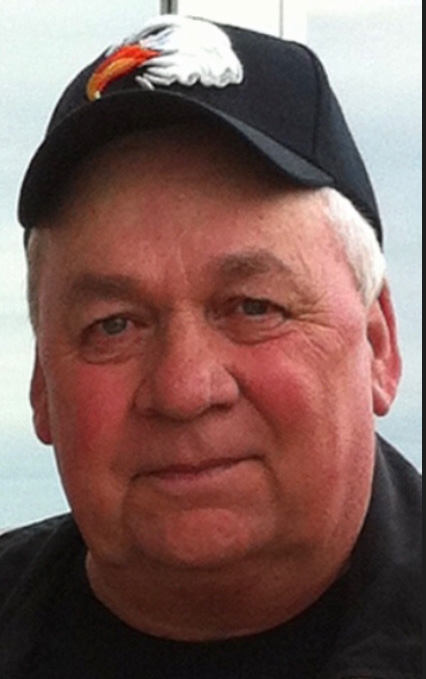 It is with profound sadness the family of Leon Gregory Swire announce his sudden passing on July 26, 2019–just 17 days after the passing of his love of 30 years, Olga Dawkins.
Leon was born April 18, 1948 in Fort Frances, Ont.
Leon grew up on a farm north of Emo. Following high school his first job was on the CN Railroad in Northern Manitoba.
He worked for a short time in the Griffith Mine in Ear Falls, Ont. During those years he started his own family of three boys.
Returning to the Rainy River District to raise his family, he spent time working on the Noden Causeway with Ontario Hydro.
He finished off his working career with the MTO after 25 years of service. Following his retirement Leon’s ambitions led him to work for Paul Brown Trucking.
Leon had many hobbies. Hunting, fishing and was a “star” pitcher and first baseman for the Emo fastball team. He spent many nights at the stock care races and curling clubs.
He treasured his fishing trips, even the days he didn’t catch fish. He mostly enjoyed fly-in fishing trips with his boys where many memories and stories were made.
He loved to entertain and had a very unique sense of humour. He was famous for being a prankster and playing jokes on his family and favourite co-workers, Mavis and Vikki.
Leon had a large circle of friends who where very dear to him. He was a loving family man and was very proud of his sons and grandchildren.
His family will miss the perogies that were made by the dozens. There is hope we can carry on the tradition. With the help of Lillian, that might be possible.
Leon is survived by his three sons, Greg (Stacy), Grant (Heather) and Gary (Kim); stepdaughters Donna (Dale) and Deanna (Colin); grandchildren Josh, Robyn, Hailey, Taylor, Dylan, Dallas, Garileigh, Walker, Abbygail, and Sydney and several great-grandchildren.
He is also survived by his siblings Rod (Penny), Kathie Brigham (Ed), Ruth-Anne Agostino (Tony), sister-in-law, Lillian Bodnar, Doreen Bodnar, Edith Bodnar, Cheryl Bodnar, Anne Cain (Raymond), Evelyn Meyers (Frank), Eleanor Johanson (Steve); brother-in-laws, Edward, Marvin, Norman and (Lecea); mother of his boys, Marlene Witherspoon; numerous nieces and nephews; and his furbaby, Phoebe.
He is predeceased by his partner, Olga Dawkins; grandmother, Francis Jourdain; birth father, Edmond Jourdain; parents, Gus (Lorraine) Swire; and brothers-in-law, Michael, William, John and Paul.
A come and go gathering for family and friends will be held on Friday, Aug. 2 from 1-4 p.m. at Greg and Stacy’s home, 1922 La Vallee Road North.
Private interment will take place at a later date.
If desired memorial donations may be made in Leon’s memory to the Tamarack House, c/o Northridge Funeral Home, Box 89, Emo, ON P0W 1E0.

A limb has fallen from the family tree
that says
Grieve not for me
Remember the Best Times,
the laughter, the song
the good life I lived while I was strong.