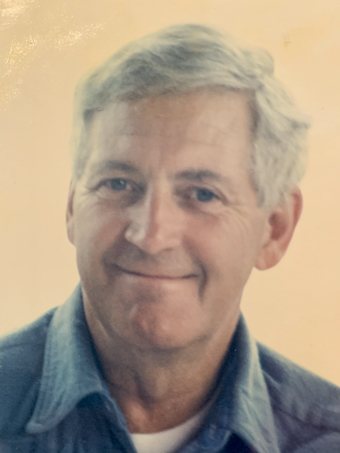 Dick Lyons passed away peacefully at Rainycrest on Feb. 8, 2020 at the age of 85. Dick was born to the late Rose and Tim Lyons at the Border Mill on Rainy Lake, the middle child of seven. His siblings (Bill, Marie, Shirley, Tim, Wayne, and Carole), nieces, nephews, and their children were so very important to him and were a big part of his life. His stories of childhood antics with his brothers and sisters are legendary! Their spouses were dear friends to him and together they shared many adventures on Rainy Lake and beyond.
Dick was exceptionally kind, honest, and fair. His smile was contagious. Even when his dementia meant he no longer spoke, as soon as he would lock eyes with someone, his whole face would open up in a giant grin. He brought joy and compassion to everything and everyone and he was an incredible story teller. He and Carol shared a deep friendship, a life of love, laughter, and respect together for almost 64 years. When he married Carol at a young age, Bob and Billie Kennett became a second family to him and, with that came years of new antics and fun times with Sandra and her family. Randy, Robbie, and Rick were the sons he never had and he loved their children (Michael, Daniel, Kyle, Abby, and Anna) like his own grandchildren. He shared life-long friendships with brothers-in-law, Frank Stewart and Julian Brunetta. Despite having an extended family that was practically the size of the whole town of Fort Frances, the most central figures in his life were his two daughters, Kelly and Sue, who made him very proud. He raised them with gentle love and kindness which they carry on to their partners (Donny and Geoff), their children, and all the people who enter their lives, because that’s how Dickie lived his life. He cherished his grandchildren, Peter, Andrew, Katie, and Hazel and they deeply loved their Grampa Dickie, his stories, and the many adventures they shared with him. He loved being in the thick of it with his kids, grandkids, nieces, nephews, their kids, neighbours, and visitors from afar taking little ones tubing behind the skiff, dumping big kids off the tube behind the boat, roasting wieners and cans of beans over his epic campfires, building ice rinks, running around on the snowmobile, playing ice golf, hauling anything anywhere with the four-wheeler.
He had an incredible work ethic and a long and varied career. Dick started work in the grocery business at a young age, delivering groceries for Shop Easy when he was 12. He went on to become a butcher at “The Frige” in Fort Frances, to salesperson for Western Grocers, to manager of Shop Easy (in Thunder Bay, Marathon, and Atikokan), and co-owner of and butcher at the Food Basket. He left the grocery business in 1974 and became the terminal manager at Kingsway, later Gardewine. He was a strong advocate for Fort Frances and the Rainy River District and served as Councillor and Mayor of Fort Frances, Executive Director of NOMA, and on many local Boards, Committees, and Service Clubs. Each role brought new adventures and new friends whom he came to think of as part of his family.
Dick’s family invites friends to join them in a celebration of his life that will take place at La Place Rendez-Vous on Saturday, Feb. 15 from 3 p.m. to 5 p.m.
In lieu of flowers, a great way to honour Dickie would be to smile at friends and strangers alike, make people feel welcome and good about themselves, and, if you are so moved, consider making a donation to Rainycrest Auxiliary (Dickie’s home for the past 6 years where he received outstanding care and love), to the Knox United Church, or to a charity of your choice.