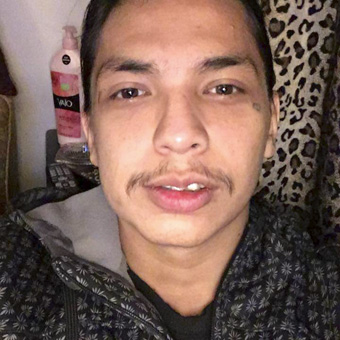 Chauncey Lyle Grover III was born in International Falls, MN on May 19, 1989. Chauncey Lyle Grover passed very unexpectedly on April 8, 2020, on Couchiching First Nation.
In early childhood Chauncey resided in the Couchiching, Fort Frances and International Falls area with family, he enjoyed living with his maternal grandmother and his auntie Peggy. He eventually moved with his siblings to Noatkamagwanning First Nation and Sioux Narrows area where he met his mother Debbie and father Terry along with his brothers Jason and Mason. He enjoyed playing outside with his brothers, playing video games and swimming. In his youth he lived with family members (Tina &amp; Will, Nicole &amp; Dan, Auntie Maxine) in the Fort Frances area until he was an adult.
In adulthood Chauncey was often in the Fort Frances or Thunder Bay areas. Chauncey met Michelle and they had three beautiful children, he was a very loving and caring father and his children were his world. Chauncey was always a family person, he loved spending time with all his family. He enjoyed joking around and cared deeply for everyone. He loved to listen to music and he was a very social person, he was well-known and had a lot of friends. He enjoyed spending time on Facebook and other social media platforms, he enjoyed playing Magic of the Gathering and collecting cards. He enjoyed watching movies and taking walks in nature.
He is survived by his children Raina Rose Grover, Chauncey Lyle Grover IV and Haven May Grover; his parents Sandra Jourdain, Chauncey Grover Jr, Debbie Paypompee and Terry Paypompee; his siblings Chelsey Blackjack (Travis), Harley Grover (Farron French), Jason Paypompee (Nikkol Medicine) and Mason Paypompee; his cousin-siblings Christina Grover, Bryan Martineau, Rachel Martineau and Michelle Martineau; his nieces Kalistah &amp; Lillith Blackjack and his nephew Travis Blackjack Jr; his grandfather Robert (Chug) Yerxa (Barbara Johnson); Aunties Peggy Martineau (Steve), Tina McGinnis (Will); Uncles Steve Grover, Lloyd Grover, Gilbert Grover (Agnes), Tim Grover (Nicole Cochrane); the love of his life and mother of his children Michelle Cupp; along with numerous cousins, nieces, nephews and friends.
Chauncey is preceded in death by his grandparents Patricia Grover, Chauncey Grover Sr. and his maternal grandmother Marlene Yerxa; his auntie Maxine Perreault and Ruth Grover; numerous friends who left before him and his childhood friend Kyle Kakeway.
A private family service will be held and a public memorial service will be held once the Covid Outbreak has passed.
The pallbearers will be Mason Paypompee, Vernon Horton Jr., Dustin Horton, Milton Strang, Anthony Martineau, Brian Pearson.
The fire keeper will be Tim Hager.
If friends so desire in memoriam donations may be made to the Canadian Mental Health Association, 612 Portage Avenue, Fort Frances, ON, P9A 1M7
Online condolences may be made in care of www.greenfuneralhomefortfrances.com.