I love watching curling on television. Always have, so you can’t blame it on my age.
My daughters groan when I tune in to curling and they roll their eyes as if I’ve just made the lamest confession of all time; as if I showed up at their workplace with rollers in my hair.
They used to collect snails and earthworms, and I didn’t groan about that; never complained when I had to empty their pockets before doing laundry (okay, I might have complained but only with moderate loudness).
Curling is so interesting and the physics of the game is fascinating: the angles, the brushing, the speed, the turns, the freezes, the quadruple take-outs. Great stuff.
I have to say this year’s Canadian women’s championships, The Scotties Tournament of Hearts, was the best curling I’ve ever had the pleasure of watching. The Tim Hortons Brier served up some amazing shots, too, but nothing like the buffet the women prepared.
Ontario’s Rachel Homan was fearless in leading her team to victory, and I’m certain she has the confidence and skill to make any shot she puts her mind to. She most definitely has raised the bar of what can be expected in curling.
I admire all of Canada’s curlers, though I have my favourites. Who can’t help but cheer for Glenn Howard with his incredible record of longevity, though I miss Richard Hart’s antics on that team.
I nearly passed out when Glenn lost to Jeff Stoughton in the 1-2 Page game, then found himself battling it out with Newfoundland for the bronze. I’m not sure I have recovered.
Alberta’s Kevin Martin has just as convincingly proved his skill over a lot of years winning every curling prize on the list. His recent performance at the 2013 Brier is a reminder that it is just as important to learn how to lose as how to win.
Northern Ontario’s Brad Jacobs brought us “northerners” together as we cheered him on to victory, ending a 28-year drought since Al Hackner dazzled us with his curling wizardry and the “Al Hackner Double” in 1985.
If you tuned in, undoubtedly you witnessed Brad Jacobs’ fearless determination.
I watched every game and stayed up much too late to see the games finish. I can’t help myself and I’m not apologizing. I love the game.
But no one loves the game more than those professional cheerleaders called “The Sociables,” who have taken cheering to new heights since 2009. They have been called “uber fans” and they are nothing short of superb.
They dress up, they hold up placards, they laugh and shout and cheer, and make the whole experience for those who sit around them much more fun.
These curlers aren’t signing contracts for millions of dollars; they leave family and jobs and they work incredibly hard at their sport while making it look effortless. I applaud them, though I am chuffed when they miss a shot (makes me feel less inadequate).
As with all good things, there is a downside. With all these curling broadcasts comes some of the most repetitive advertising on the face of the earth. The Scotties sponge-pocket towels and their chubby cohorts are reasonably funny, and I do enjoy the daydreaming curlers.
But if I never see a Capital One commercial again in my entire life, it will be too soon. And my answer to “what’s in your wallet” will never be a Capital One card.
M&M Meats’ one-aisle campaign has made me want to poke my own eye out and Jennifer Jones curling in the grocery store for a box of facial tissue made my eyes bleed after seeing that same commercial 5,000 times over several years.
I know it’s not the Super Bowl, but it almost is. Where are the commercials that surprise us, that go into the advertising hall-of-fame? I’m begging you sponsors of Canadian curling: get some new material!
Now I must get some rest and get some work done because the world curling championships are just around the corner and I’ll need to hear Vic in the TSN broadcast booth ask his stupid questions.
It’s a must.
Life should unfold like a curling game: set up a couple of guards, sneak in behind, and then make a run for the button—all done while walking on ice, thin or otherwise.
wendistewart@live.ca 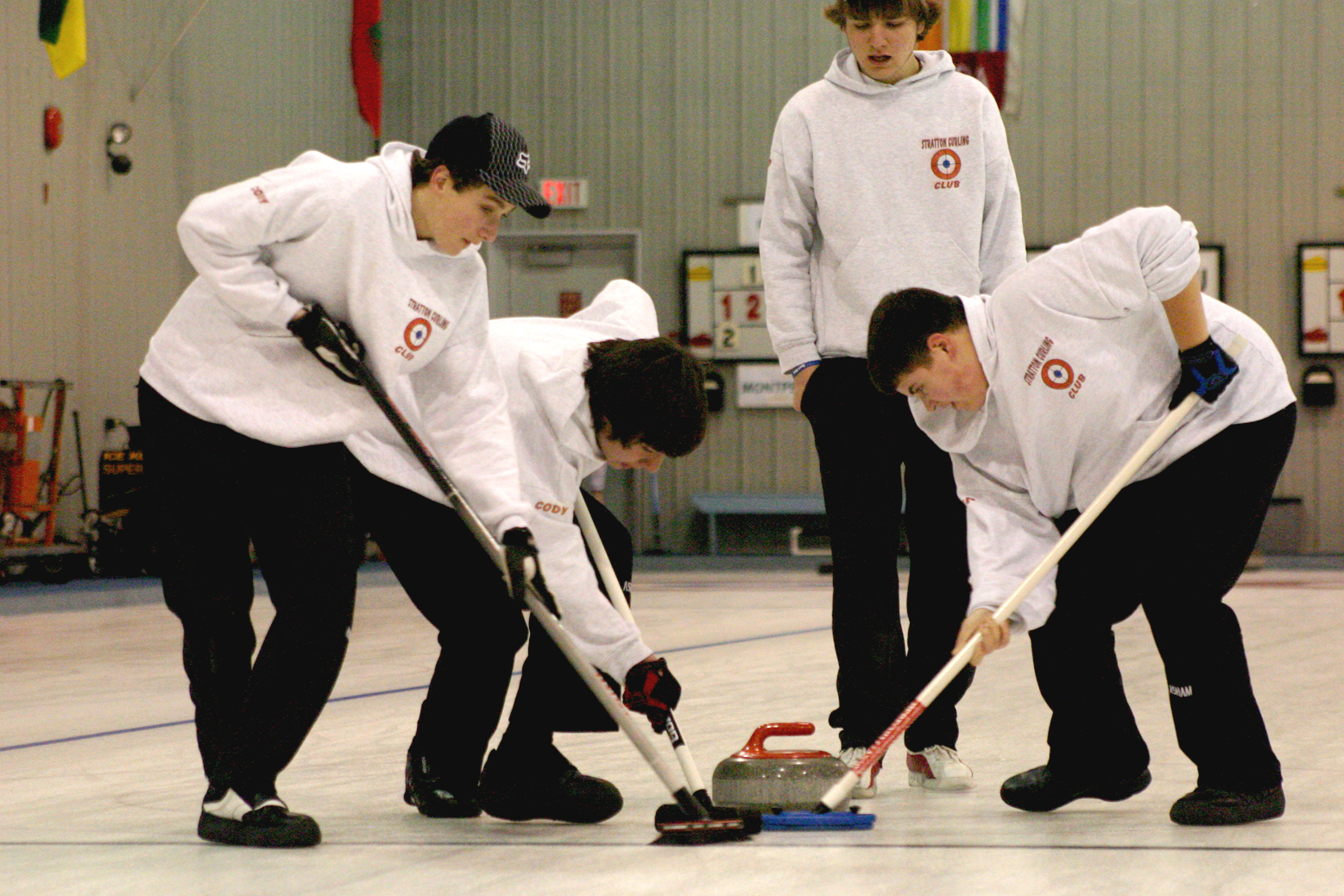 Jared McQuaker, representing the Stratton Curling Club, instructed his team of Cody Heyens, left, Cody Ossachuk, and Ben Miller to sweep hard during the third draw of the Bantam provincial playdowns here Friday. The team won just one of their five games over the three-day event, with the Kristofer Leupen rink of Geralton Curling Club taking first place. More photos inside.